"Hubby and I will be celebrating our 50th anniversary May 31, 2025. we will be renewing our vows, in the country. I would love ideals for that and in gold. Simple homemade farmhouse crafting. Thank you Linda Jung"

Interweave is one of the nation's largest arts and craft media entities with businesses in magazine and book publishing, interactive and social media, television and video programming, directories, and events for craft enthusiasts. Interweave delivers best-in-market content to enthusiasts when, where, and how they want it. Interweave owns and operates 15 consumer arts and craft magazines, more than 30 special newsstand publications, 350 art and craft books, 33 websites, 10 online communities, e-mail newsletters, an e-commerce store, 11 consumer events, video workshops, and sponsors 3 craft television series on public television. Interweave was founded in 1975 by Linda Ligon, who remains today as creative director. 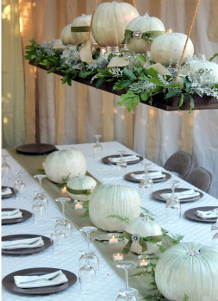 Go for the unexpected by hanging your centerpieces rather than having them take up space on the table. Not only is the effect awesome,… See more Continue reading: "Autumn Magic DIY Centerpiece"